The Country is in the process of opening back up. Also opening up are Casinos and Poker Rooms! Poker is a lot of fun when you play with money you can afford to lose. With any given turn of a card, a losing hand can turn into a big winner. Too often however, new poker players get a bad taste in their mouth about poker because reality does not meet their expectations.

This post is about a newer player sitting at a small stakes no limit holdem table holding a big pair. While the play of the hand is common with newer players, it is also common with online players who come to play live.

As with any advice, half the people reading this will know the play is correct, and I am wrong. This is what makes poker fun, and sometimes rewarding. Who is right and who is wrong? The one who wins the pot is right for the hand. In general though, money saved is money earned.

Big pairs cost newer players lots of money at Small Stakes No Limit Holdem. Big pairs are one of the most frustrating hands for many players who watch world class players play big pairs.

Tuning into one of the late night televised poker games, you watch a player get dealt a big pair, bet it out and absolutely crush the table. Perhaps sending a player home in the process.

The reality for the level of poker most of us play, is big pairs may be big before the Flop, but by the River, they may as well be a pair of two's. The difference in play is the low cost of playing at the stakes most of us play at.

I made this screen shot of a player holding a pair of Kings, a big hand at any table. If you play small stakes, you will see the following scenario play out often. The Big Blind looks down to see KK. It is a family pot when the betting gets to the Big Blind.

Everyone is in for the minimum. Big Blind, in his minds eye sees himself raising big here and scooping the pot uncontested. Big Blind puts out a pot size raise. Sure enough, it is fold, fold and fold until it gets to a late position player to the right of the button.

This player does the unthinkable. Not only does he not fold, he re-raises the size of the pot! KK is not to be pushed off of his pot. He knows KK wins more than its fair share of pots in one on one play. In fact, he knows, KK is only beaten by AA preflop. 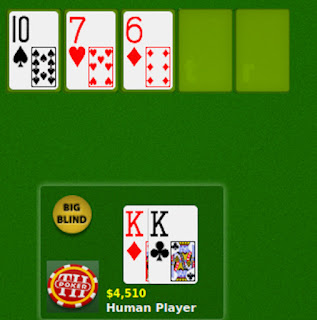 This player in late position only called the first go round, so AA feels unlikely. Big Blind swelling with confidence calls the raise. He knows the pot is his. The flop comes down, T, 7, 6 rainbow. Big Blind is feeling quite comfortable with this rainbow, double gap, middle card flop and bets out big, expecting to win right now.

The player in late position thinks for a few seconds and goes all in. Big Blind is rocked to his toes and his stomach feels queasy. He has half his stack in already and now he faces an all in. His K,K isn't looking as shiny and sparkly as it did preflop.

Scenarios like this are common in small stakes no limit live poker. Players continuously over value their hands, and find themselves in spots like this. Their hand may be good, or it may be worthless, but it will cost most if not all their chips to find out.

At small stakes no limit Holdem, there are all types of players, from the player who scraped together one buy-in to the player who left a hundred dollar a hand blackjack table because he was bored.

Many Players blame these situations on the limits, thinking this does not happen in "real" poker games at higher stakes. It does. As the money goes up, aggression follows, starting preflop. Higher stakes games also have players out to have fun, and really do not care too much if they win or lose, but not so many.

At higher stakes the blind money takes on more importance. You are as likely to be raised preflop by a player holding 2,2 as you are a player holding A,A. How much are you willing to put in the pot to find out if your hand is good? The saving grace of small stakes no limit holdem is real aggressive betting is generally saved for post flop and beyond.

Back to hand I described. Does the late position player have AA, 89, 66, 76, TT or nothing? How often is the Big Blind willing to put most or all his chips in the pot to find out? Who is going to open their wallet for more chips, or go home with their head hung low thinking the other player is a clueless lucky idiot? 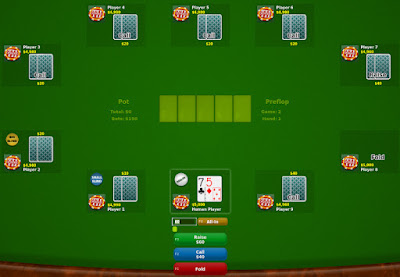