So this is rewrite number something or another, as what I want to write is not flowing very well.

When the original Star Trek series was released. Michelle Nichols played Nyota Uhura. Uhura is a translator and communications officer in the series. Star Trek was a serious show and Lt. Ohura played her part, as serious and professional as any other actor. Star Trek was starting at a time when there were very few mainstream serious Black Actors, male or female. The world of Black America, actors and not was starting to change.

My (almost) total exposure to Black America back then was one boy my age in school and the old movie, Gone With the Wind. Stereotyping was an unknown word in those days. Needless to say, my Black Friend and Gone With the Wind were in complete contrast with each other. I had been around other teenage Black Boys more or less my age, and never thought they were any different than myself. A few years later, I started hearing the word, Blaxploitation and had no idea what it meant.

Looking back, it is obvious. Black Actors were forced to take parts where their character was silly and questionably funny. Not college professors, Doctors, or white collar workers. Usually some conceived character who was the inner city version of a Hillbilly who was funny in the end. Blaxploitation arrived on the scene, and I think everyone in America understood immediately what the Blaxploitation was. Blaxploitation it felt was stomped out in a few years. With a few exceptions as it never left the media completely.

As far as I am aware, the added, "Woman of Color" was added on mainstream news and talk shows recently. It was being used as casually as, the Weatherman talks about a cold front passing through. Is there anyone in America who is the least informed, not does not know or care Senator Kamila Harris is, "a Woman of Color"? Of those who do care, they were represented on January 6, at the Capitol Building. There is an older form of Blaxploitation showing up in the media. After several decades self proclaimed, "America's Favorite Gameshow", has a still of a Black Woman in a funny but stereotypical Blaxploitation pose. This never would be a White Woman's picture.

An insurance company that advertises to excess has taken Blaxploitation to an even higher level. The are airing a commercial where two Black Rappers appear in a Black Woman's kitchen rapping about making ice cream sundaes. The Woman is so excited by the rap, she starts dancing. The Woman's daughter and significant other walk into the scene. The Man is so taken, he also starts dancing. The Daughter sees no humor in the situation and leaves the scene. This commercial would never have been made with a White Woman and her family. 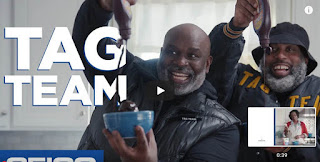 We have a hordes of active racists protesting, invading sacred spaces, and threatening the overthrow of our country, and the networks and media in general seem to believe Blaxploitation is not only acceptable, but completely normal. This leads me to one conclusion with two outcomes.

With Black Lives Matter making a presence such as when Martin Luther King was alive. We have groups of Active Racists mixed in with the other mostly white groups threatening to over throw our county. We have mainstream media practicing Blaxploitation.

Perhaps I am so far out of the mainstream that I am the only person to find this distasteful. Am I overly angered and frustrated over lack of empathy for Black Lives Matter and angered about Blaxploitation. Am I too sensitive about how some of America has once again chose to be callous and indifferent on two of the most important issues of the last and probably this decade?

BLM and Blaxploitation are obviously issues Black America does not have enough of a say in to make permanent change. That leaves the rest of us to take a stand with Black America. I am not saying we need to get out there and march in the streets, and attack Police Barricades. I am saying, an email or phone call only take a few minutes and sends a message that shows Americans care about Black America and all America enough to make our voices heard.

When I was a college freshman attending a Political Science class, the Professor made what turned out to be a prophetic comment. He said something to the effect of: 'As adults in America, if you do not make your voice heard over issues you care about, your silence will be taken as an, "it is okay with you". Are you comfortable with your silence being taken as, "it's okay with you"?'

Whether it is a re-showing of Buckwheat and the Little Rascals, or Senator Harris introduced as, "a Woman of Color",  is stereotypical and an insult of our fellow Americans and must no longer be tolerated. The "Talking Heads" may have an issue with someone's race, however it is not your problem. Make your voice heard. Letting your voice be heard only takes a couple of minutes at most, and carries a lot of power with companies who seem to not be doing business in 2021. The extremists who attacked the Capitol Building on January 6, have certainly been making sure their voices are heard. Should they have the last word?

Walking in the park today, was an older man walking with a metal collapsible baton, fully extended. As we closed the gap towards each other,...