Linux Mint Installed on a Late 2013 imac. One Minty Apple.

I was given an "old" 21.5" late 2013 imac five years ago. I used it every day, mostly for writing and note taking. The selection of free software you want to use on an IOS machine is so limited, so you do not do much else with a Mac unless, just like Windows you start buying overpriced programs.

Me and my imac were together until this spring, when opening Firefox and a notepad was too painful. My imac was down to a one program at a time system. I bought a desktop and put Linux on it. I do miss my imac screen quality, but you can't have everything.

Or can you? I read once in a while about putting Linux on a Mac. The information was scattered and inconsistent, but it seemed it could be done. Last week I came across a couple of articles that installed Linux Mint on an imac. Seems like I am doing a lot with Linux Mint these days as I find Linux Mint to be accomodating.

I was going to give my imac away, with an Apple planned obsolescence operating system, that should have put down, it wouldn't really be worth the pain and frustration to many people. So I thought, why not try to put Linux on my old imac.

One reference I found used a PC wired keyboard and wireless mouse. I purchased the cheapest plug and play wired keyboard and mouse I could find. I plugged them in, turned on the old imac and held down the alt key as I had read. The imac booted.

I tried several times, expecting different results, but the imac kept going into normal boot mode. I took off the keyboard and turned on the Mac keyboard and held down the Command key, and up came boot choices. I chose EFI, and the Linux Mint ISO USB stick was booted. No mouse, but Linux was booted on my old imac.

This was a puzzle. Why would Linux boot and the mouse not work? I tried again using the Mac keyboard and wireless mouse. The Boot choices screen came up again. I picked EFI and Linux Mint was booted. No working mouse and no keyboard again.

I had a hunch it was something to with Apple ensuring nothing non-Apple could be used on the imac. My thought then was to eliminate as much Apple as I could. Which in this case was the wireless Apple keyboard.

I turned off the Apple keyboard and plugged in the wired keyboard. I booted into IOS, and a screen came up wanting me to identify the keyboard by pressing some keys and picking the style of keyboard. Once I did this, the keyboard was accepted.

I went back to the web, reading about installing Linux on a Mac, and found a blurb that said to hold down the left Alt key as the initial chord plays. I had the sound turned off, and had been holding down the Alt key as soon as I pushed the power button.

With the wired keyboard and wireless PC mouse, and the sound turned up, I powered the imac up. When the chord played, I help down the Alt key. Up popped the boot screen! I picked EFI, and Linux Mint booted up. I moved the mouse and the mouse worked. I opened text editor and started typing and the keyboard worked.

I played around a bit ensuring everything was working as it should. I opened Gparted, erased the Apple partition which left the EFI partition and a bunch of empty space. I partitioned the empty space into three partitions. Root, Home and Swap partitions with Swap at the end of the disk as it is faster.

I opened the install and picked "something else" when it came to the hard drive, and manually entered the partitions. The installer finished flawlessly, and said I could reboot.

Once that was done, I rebooted, updated, and added some more software. I think I have found a Grade School Student that is going to class on an ipad. I think he will be thrilled an Apple imac running Linux. I am jealous of the screen. Makes my monitor look shabby as always when compared to a Mac. 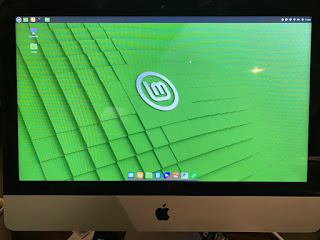 If you have a pre 2015 Mac laying around, you too can install Linux and have a good usable computer again. Here are the steps I used refined.

1. You need a Linux ISO that will use at least Broadcom proprietary drivers properly installed to a USB stick for wireless connections.

2. Find a plug and play wired keyboard and wireless mouse. The two I found were about $25.00 total.

4. Power on the Mac. let it boot and let it identify the keyboard. Shut it down. Plug a network cable into the Mac and your Modem or Router.

6. When the Chord plays, press and hold down the left Alt key. (I don't know if left or right Alt key makes a difference, but it did years ago)

8. When the ISO is booted, open GParted.

A. Erase the Mac partition

B. Create a Root Partition

D. Create a Swap Partition (twice the size of you memory is all you need)

9. Close Gparted and start the installer. When it comes to the Disk partitioning, pick "Choose something else". Set up the partitions you created and continue.

10. When installer is done, reboot as directed.

If you use wireless, open up the Driver Manager app and select the Broadcom drivers. Let the install complete and reboot. Upgrade as required. Happy Computing!

Walking in the park today, was an older man walking with a metal collapsible baton, fully extended. As we closed the gap towards each other,...